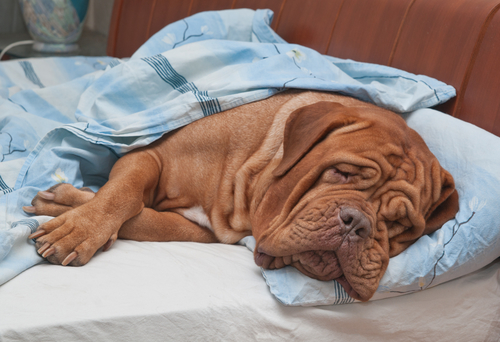 Although we don’t currently know with absolute scientific certainty that dogs dream, there is definitely evidence to support that belief. Just about any dog owner has probably watched their dog fall asleep after enjoying a big bowl of delicious dog food and then do things that the dog also does while awake. A twitching nose, whining or wagging tail are a few examples of things you may see your dog do while it’s asleep.

Sleep Research and How It Applies to Dogs

To understand why it’s reasonable to make the assertion that dogs dreams, we need to start with a study that was done at MIT. Back in 2001, a professor of neuroscience and one of his graduate students studied how dreams, sleep and memory are related to each. The pair used rats for their study. They found that when those rats were trained to run along a circular track for food rewards, their brains created a distinctive firing pattern of cells.

The study then applied the same brain monitoring to the rats while they slept. What the researchers discovered is the rats had the same signature brain activity pattern associated with running regardless of whether they were awake or asleep. Based on these results, along with what’s known about how humans dream, the professor who conducted the study said that he believes “unless there is something special about rats and humans, cats and dogs are doing exactly the same thing.”

One of the reasons it makes sense that rats, humans, cats and dogs would all have similar dreaming habits is the wiring of the portion of the brain that collects and stores memories is pretty consistent across all mammals. The MIT neuroscience professor believes dogs’ dreams consist of images of past events replaying in their minds.

Another piece of evidence that supports dogs dreaming is they do experience REM sleep periods. As you may already know, REM stands for rapid eye movement. For humans, these periods last 90 to 110 minutes and are when the majority of dreaming takes place.

Muscle twitching and breathing that’s more shallow are two common signs of REM in dogs. Then if you look closely at a dog’s closed eyelids, you may be able to see their eyes moving very rapidly. This is also the period of sleep when dogs generally do things like twitch their nose, whine or wag their tail.

So based on the available research and additional evidence of dogs dreaming, it’s safe to say that you can continue to get enjoyment out of imagining what your dog may be dreaming about!
Posted by Unknown at 6:11 AM