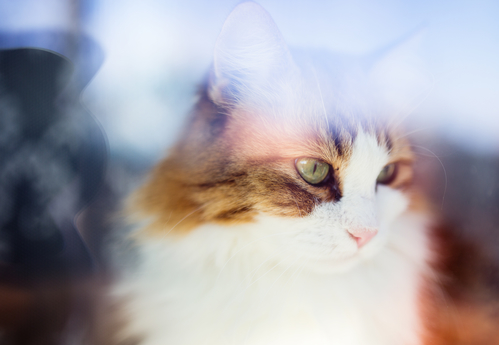 Cats are very smart animals. One of the reasons is they pay very close attention to their surroundings. For example, your cat probably knows the signals of when you’re going to fill its bowl with new cat food. While this knowledge is based on your cat understanding patterns, how do you explain a cat that tries fleeing or frantically grooms its face prior to the arrival of a storm?

Humans have noticed these behaviors in cats for several centuries. In fact, there was a time when sailors blamed cats for causing storms. Although cats’ ability to sense storms can still seem quite amazing, scientists can now explain exactly how felines are able to pull off this “trick.”

Before we get to the big reveal of what gives cats the ability to make this prediction, we want to share a few more anecdotes about past beliefs related to this behavior. Not only did sailors blame cats for bringing storms, but they used them as a tool for deciding whether or not it was safe to set sail. Noticing a cat giving any signs of an impending storm meant that a sailor may have decided to stay docked.

There are also references about cats pawing their faces prior to a storm that date all the way back to a book published in 1620. Charles Darwin’s father also wrote a poem about bad weather and included the following verse, “puss on the hearth, with velvet paws, sits wiping o'er his whiskered jaws.”

The Secret to Cats Predicting Storms

The reason cats are able to take action before the arrival of a storm is they sense shifts in barometric pressure. Sometimes referred to as atmospheric or air pressure, this shift is part of the formation of a storm. A storm is formed when cool and warm air systems collide with each other. This collision causes the warm air to go up and the cool air to push down. During the rise of the warm air, it cools down and creates the condensation that makes up clouds and storms.

Just as your cat pays close attention to the actions you take around your home, it does the same with changes in the environment. This includes the pressure shifts that occur as a storm is forming.

As mentioned above, the two behaviors that have always been associated with cats predicting storms are fleeing or pawing their face. The former behavior is explained by a cat’s survival instinct being triggered by the realization of an impending storm. And the most common modern explanation for a cat pawing its face is the barometric pressure shift causes a cat some level of discomfort, which it tries to remedy by rubbing its face.
Posted by Unknown at 12:25 PM